MUSE is a clothes- and costume repository supporting to capture, store and analyze clothes and costumes. The concrete costumes occurring in films can be captured in their relevant details and analyzed to identify abstract costume patterns. Based on comprehensive taxonomies of costume relevant parameters MUSE enables advanced query- and analysis capabilities on concrete costumes. This supports the detection of costume patterns. Costume patterns are defined as an abstracted solution to determine an adequate textile expression of a film character.

Patterns and pattern languages are a concept that aims to capture and provide abstracted knowledge in a variety of domains. Originally developed in the architecture, the concept of pattern became popular in different fields of computer science. A pattern is a textual representation that follows a pre-defined format to document proven solutions of recurring problems.

As part of the Digital Humanities, MUSE adopts the concept of patterns to media science to reach a better understanding of vestimentary communication in films. For example, how can a costume communicate special character traits, the mood of a character or its transformation? How does it give information about the time and setting of the film? What "proven solutions" are used by costume designers to support an easy recognition of a cowboy or an outlaw? Answers to these and other questions will be approached by a pattern language for costumes.

To create such a pattern language for costumes the "concrete solutions" (i.e. concrete costumes occurring in films) need to be analyzed in detail in order to be able to identify the “abstract solution". Therefore MUSE supports a comprehensively capturing of costumes to enable advanced analysis of this costume data. To capture the costumes in a structured way, MUSE is based on extensive taxonomies. The taxonomies structure the costume relevant parameters as domain-specific knowledge that enable to capture every costume in detail: therefore the costume gets divided into base elements (like pants, shirt, shoes, etc.), their primitives (like pants consists of trousers, waistband, closure, etc.) and properties (color, material, design, function, condition, etc.) as well as operators (a shirt for example is "worn on” the body and has a relation to the pants called "worn above "). 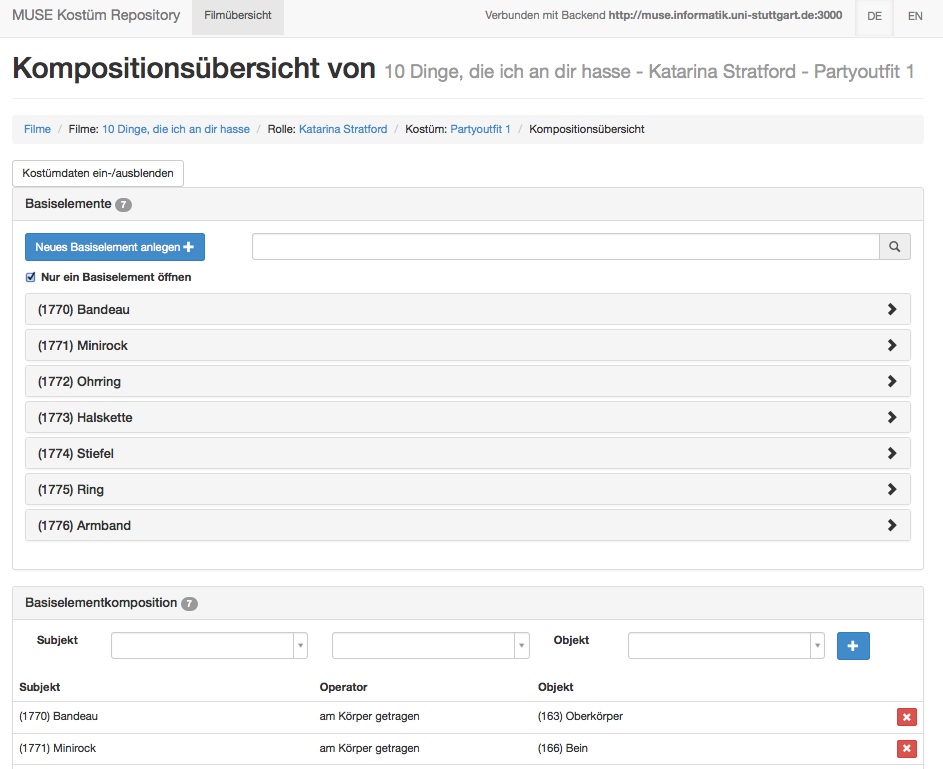 MUSE Screenshot
By analyzing the costume data the identification of costume patterns can be supported. The concrete costumes that have led to the detection of a costume pattern are connected to these patterns. The costume patterns and their relations to each other (namely the pattern language for costumes) are stored in PatternPedia, our domain-independent pattern repository.

To the top of the page